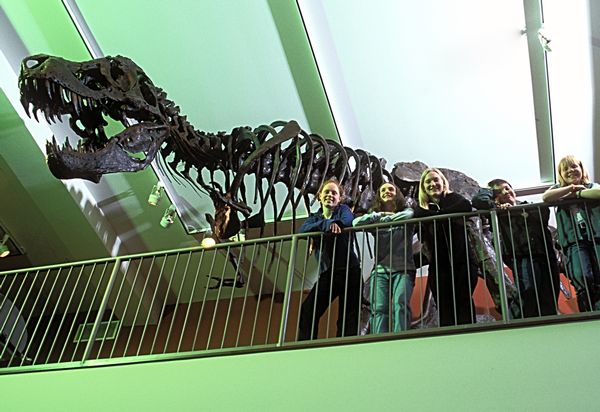 The Washington Pavilion of Arts and Sciences in Sioux Falls, South Dakota, is the perfect place to spend a day with the family. As the state’s premier entertainment, cultural and educational facility, the Paviion features a Visual Arts Center, the Kirby Science Discovery Center, the Wells Fargo CineDome Theater, and the Husby Performing Arts Center.

Visitors to the Visual Arts Center will find a permanent collection with over 300 works of art by local and regional artists like Oscar Howe and L. Lova Jones.Â  A sculpture garden, located outside the Pavilion and open to the public during regular hours, includes Charging Bison, a sculpture by Richard Hunt, a leading African American artist.Â  In addition to the permanent collection, the Visual Arts Center has an ever changing schedule of exhibitions, including a Rodin sculpture exhibit during the summer of 2009.Â  If it’s hands-on activities you’re looking for, the Visual Arts Center will not disappoint.Â  There are art classes for all ages, from toddlers to adults, and the Raven Industries Children’s Studio, where children can create their own works of art.

Admission to the Visual Arts Center is Free!

Science comes to life at the Kirby Discovery Science Center, the region’s premier hands-on science experience. In the Dynamic Earth exhibit, you can touch a tornado or meet a 40 foot Tyrannosaurus Rex dinosaur replica named “Stan,” and then try your hand at excavating dinosaur bones.Â  The Nature Works exhibit includes live animal exhibits, including a working beehive, and animals native to South Dakota. The Kirby Science Discovery Center also has an imagination center, an air and space exhibit, and much, much more!

Admission to the Kirby Science Discovery Center is free on the first Friday of each month.

Seeing a film at the Wells Fargo CineDome Theater is a larger than life experience.Â  Films are shown on a 60-foot domed screen to make the audience feel like they are part of the action.Â  10,000 watts blasted through 24 speakers will also let you hear every bit of the digital sound.Â  Films average around 45 minutes, and are changed each season.

The Husby Performing Arts Center is a venue for all kinds of performing arts in South Dakota, including music, dance, and theater.Â  The South Dakota Symphony calls the venue home, as does the Husby Series, a line-up of oustanding live performances ranging from Broadway shows to musical comedies to world-famous ballet companies.

Whether you’re ready to relax after a day of exploration, or if you’re looking for a place to dine before you see a show, Leonardo’s Cafe is the place to go. With a wide menu of gourmet eats and a convenient location on the first floor of the Pavilion, Leonardo’s is sure to satisfy.