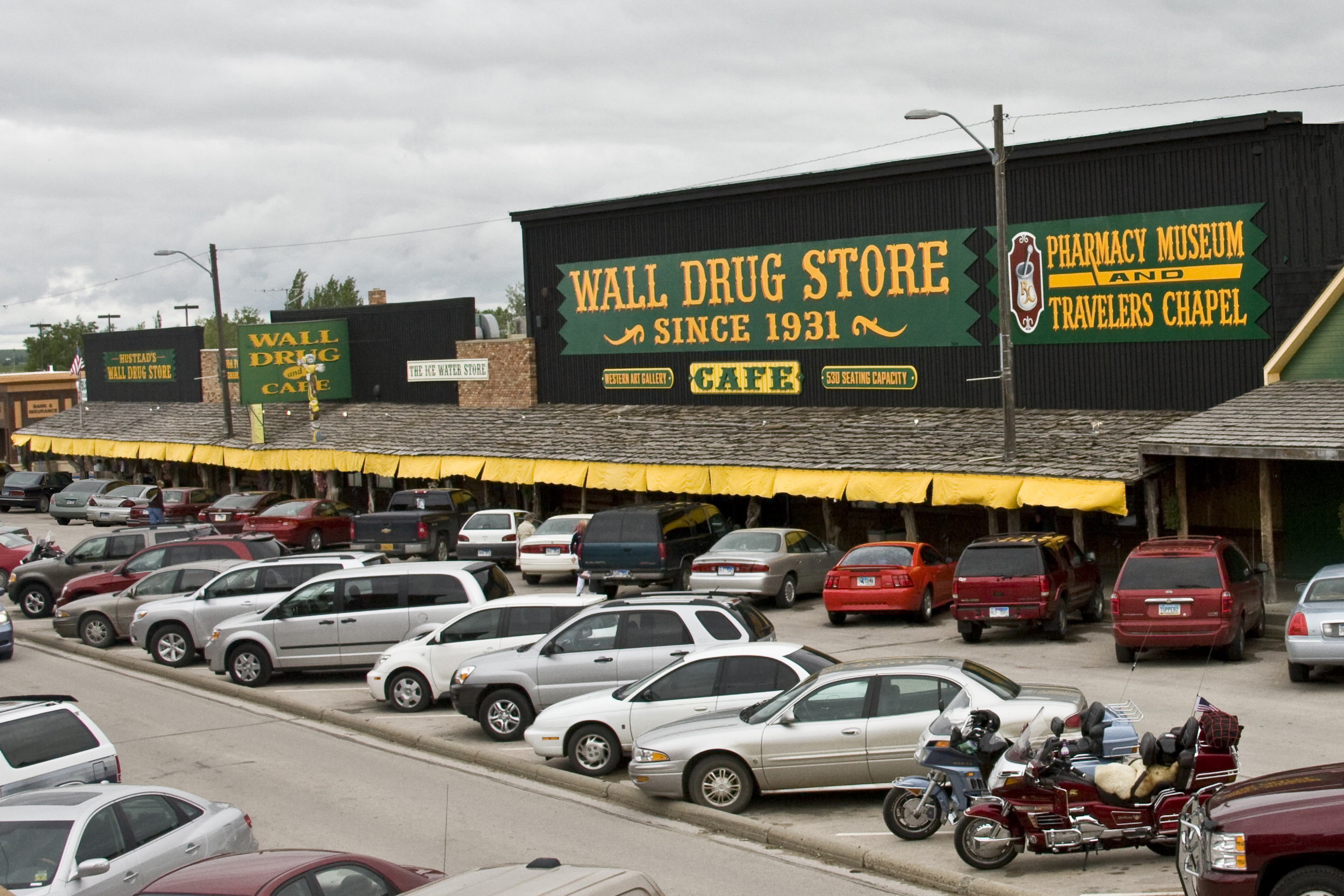 Follow the signs to fun … and free ice water

It was 1936. Druggist Ted Hustead owned a struggling store in the town of Wall, South Dakota. The Great Depression gripped the nation, and the Dust Bowl made things doubly bad on the high plains. It’s doubtful many businesses had worse prospects than Hustead’s small establishment in that small town in the far reaches of western South Dakota.

So remote and drought-stricken was Wall that, when Ted bought the town’s drug store, his father-in-law told him, â€œYou know, Wall is just about as Godforsaken as you can get,â€ Ted later recalled for Guideposts magazine.

But Ted and his wife, Dorothy, had a bit of luck on their side. Their town and their little store happened to be about 75 miles east of the place where a man named Gutzon Borglum was carving likenesses of four presidents out of a Black Hills mountain.

Dorothy figured tourists would come to see Mount Rushmore, and she figured the trek across the dry, barren plains would make those tourists hot and thirsty. The drug store should offer free ice water, she told her husband, and should put up signs along the highway to advertise it.

Ted put the signs up along Route 16A (Interstate 90 would eventually come through Wall, but not until 1969), and the tourists came. They drank the free ice water. They bought ice cream. And since then, they’ve bought millions of touristy trinkets and spent countless hours partaking of the free, 76,000-square-feet of fun and shopping that is the modern Wall Drug.

So successful is Wall Drug that the town of Wall, populated by a mere 800 residents, reported gross sales of nearly $37 million in the â€œretail tradeâ€ category in 2007.

Wall Drug still offers free ice water and still advertises with roadside signs. In fact, the signs themselves have become something of an attraction and a symbol of the unabashed over-the-topness that has made Wall Drug what it is today.

The signs are all over South Dakota, and South Dakotans who travel the world have made something of an inside joke out of posting, in the unlikeliest of places, homemade signs indicating the direction and distance to Wall Drug. During the conflicts in Iraq and Afghanistan, for example, South Dakota soldiers posed for pictures by hand-painted signs such as one stating that it was â€œ6,694 miles to Wall Drug.â€ Another sign posted by an expedition member at the South Pole declared that Wall Drug was 9,333 miles distant.

Because of the signs along roadways in South Dakota, directions to Wall Drug are hardly necessary. Just get on a highway â€“ I-90, if you’re like most tourists â€“ and the signs will guide you.

Stops along the way 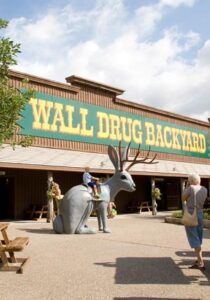 Wall Drug is a place that offers a little something for everybody. A great place to stop on your way out to the Black Hills.

Wall, South Dakota is among the few towns in the 200-mile stretch of I-90 between Chamberlain and Rapid City that is seriously engaged in the tourist trade. Another is Murdo, where you might want to stop to see the Pio

neer Auto Show, a museum featuring hundreds of cars, motorcycles and tractors. Murdo is about 80 miles east of Wall.

Another highly recommended detour for tourists approaching Wall Drug from the east is the Loop Road of Badlands National Park. Take exit 131, which is about 20 miles east of Wall. Go south on state Highway 240, known as the Badlands Loop Scenic Byway. The loop will take you on a roughly 35-mile tour through the beautifully eroded walls, spires and valleys of the Badlands and bring you back to the interstate at none other than Wall, where you can proceed on to Wall Drug.

By that time, after spending a couple of hours driving through and perhaps getting out of your vehicle to explore the treeless and sun-scorched Badlands, you’ll sorely need a glass of Wall Drug’s free ice water.

After downing your water, you can eat a meal at Wall Drug if you desire and also explore its mall-like shops. If you need to stretch your legs, you can venture out into a well-known part of the Wall Drug complex: â€œThe Backyard.â€

The Backyard is a free, outdoor, park-like area packed full of every kind of western-themed curiosity imaginable. It’s here that you can climb atop a statue of a â€œjackalope,â€ which nearly all South Dakotans know is a jackrabbit with antlers. Ask a South Dakotan or a Wall Drug employee about jackalopes, and they’ll probably take delight in trying to convince you that the animals are real and native to the state.

Like the ubiquitous roadside signs, the jackalope and The Backyard’s other marvels are representative of the tongue-in-cheek, wink-and-nod attitude that has made Wall Drug so successful. Wall Drug is not a destination, but rather a wayside attraction, a respite from the road, a place to eat and drink and buy mementos of your trip, and a place to laugh with your loved ones.

The Hustead family, which continues to own and operate Wall Drug, seems to understand the attraction’s role and identity perfectly. Wall Drug may sometimes be criticized as cheesy or kitschy, but so what. Elements of the bizarre are at the heart of every good roadside attraction, and Wall Drug is one of the biggest and best there is.

Probably all of the people who stop at Wall Drug are on their way to someplace else â€“ e.g. Mount Rushmore, the Badlands, Devils Tower, or home â€“ but their experience at Wall Drug is often the one they look back on with the biggest smiles and the most laughter.

And isn’t that what a family vacation is all about?