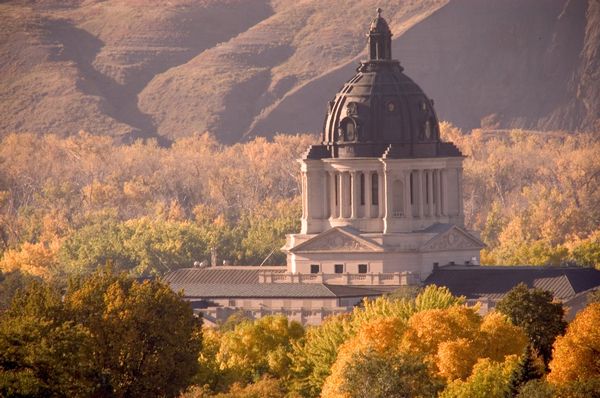 South Dakota became a state in 1889, and between 1905 and 1910, the capitol building in Pierre, South Dakota, was built after a long campaign by the city of Pierre to become South Dakota’s capital city.

The capitol building itself was designed and built by a Minneapolis architectural firm for a cost of nearly $1,000,000.Â  It is a 144,000 square foot structure, including many different materials like native field stone, Indiana limestone, and Vermont and Italian marble.Â  At 161 feet tall, 190 feet wide, and 292 feet long, the state capitol building is estimated to be worth approximately $58,000,000.

The building features Terazzo tile flooring throughout, which is said to have been laid by 66 Italian artists.Â  Instead of signing their names somewhere in the building, these artists were each given a signature blue tile.Â  In a strange twist, today only 55 of the 66 tiles have been found.Â  There is a marble staircase inside the front door of the building, and display cases housing the First Lady Gown Collection, miniature replicas of the gowns worn by each First Lady to the inaugural balls.

A 96 foot high open rotunda is featured on the second floor of the building.Â  The rotunda is decorated with 16 images of the Tree of Life, as well as acanthus leaves and a pasque flower, the South Dakota state flower.

On the third floor of the capitol building you will find the House of Representative and the Senate, both of which have viewing galleries on the fourth floor.

South Dakota’s state capitol building was restored between 1977 and 1989, in time for South Dakota’s centennial celebration.Â  The renovation took 22 years, and restored the flooring and other features to their original appearances.Â  Each of the new tile workers was said to have been given a heart-shaped signature stone, much like the original Italian tile artists.