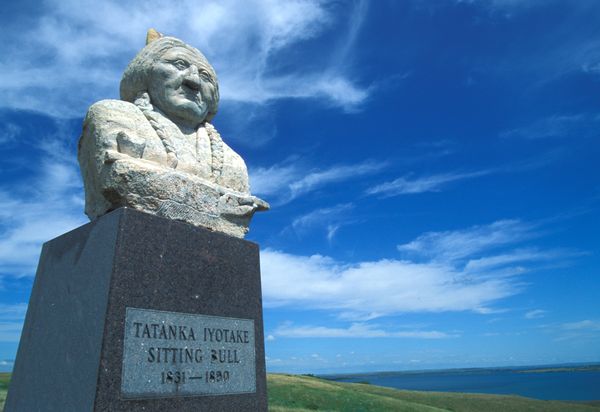 Hunkpapa Lakota leader, warrior and holy man Sitting Bull was respected for his bravery and insight. After the Battle at Little Big Horn, Sitting Bull became known around the world, and he is one of South Dakota’s Great Faces.

Sitting Bull was born about 1831 in present day South Dakota. At only 14 years old, he went to his first battle and had his first encounter with the U.S. Army.

By 1876, Sitting Bull’s leadership inspired thousands of Lakota people to stand with him and defeat Gen. George Armstrong Custer’s troops at the Battle of Little Big Horn. Custer’s defeat spurred the U.S. Army to aggressively purse the Lakota people. Eventually, the Army caused the Lakota forces to divide and many Lakota chiefs to surrender.

On July 19, 1881, Sitting Bull also surrendered because of the lack of food and buffalo. He gave his son his rifle to surrender to the cavalry men hoping he would “become a friend of the Americans.” Yet Sitting Bull still wanted it to “be remembered that I was the last man of my tribe to surrender rifle.”

– Taken from South Dakota’s Great Faces weekly press release series, a project of the South Dakota Office of Tourism designed to highlight those who have had a significant impact on South Dakota, particularly within the visitor industry.