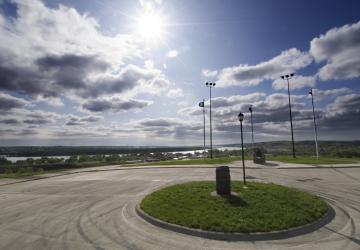 The Verendrye Site and Monument sits atop a hill overlooking the city of Fort Pierre. It is one of only a few verifiable sites associated with the first Europeans to explore the northern Great Plains region. Frenchman Pierre Gaultier De La Verendrye and his sons explored the interior of North America in the 18th century. In 1743, the brothers buried a lead plate. It was discovered by high school students in 1913 and is now on display at the South Dakota Cultural Heritage Center in Pierre.