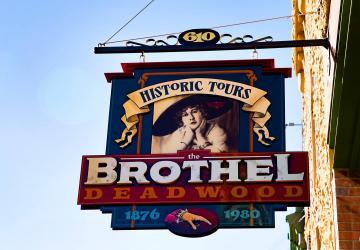 Brothels were a fixture on the second story of several Deadwood Main Street buildings from 1876-1980. This aspect of Deadwood’s history, although difficult and uncomfortable to talk about, had a huge impact on the community. A series of eight rooms have been curated with period-appropriate furnishings to help transport the visitor to another era. The Brothel is not an attempt to glamorize prostitution, nor is it meant to be an approval or condemnation of prostitution. Rather it is an integral part of the narrative of Deadwood’s unique history. The tours focus on the interpretation of the century-long history of the brothels in Deadwood, and are open to those 16 years old and older.