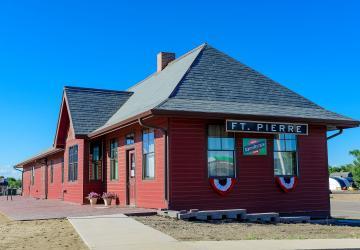 The Fort Pierre Railroad Depot was built in 1906 by the Chicago and NorthWestern Railroad as part of their expansion west to Rapid City. It was closed and sold as surplus in 1963. The Depot was moved to a ranch near Mud Butte, but was returned to Fort Pierre in March 2013 and restored. It is owned by the Verendrye Museum and officially opened for visitors Memorial Day 2016. The Depot is open 9 a.m.-4 p.m., Monday-Saturday, and 11 a.m.-4 p.m. on Sunday from late May through early September.