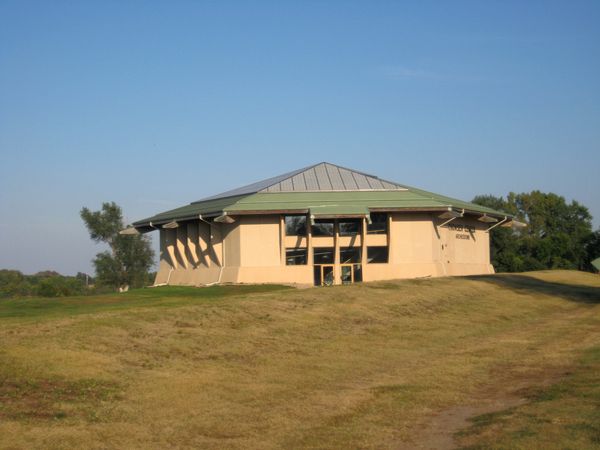 Most written histories will tell you that the area now known as Mitchell, S.D., was first settled in the 1870s by enterprising white settlers who were hoping to get in the path of the railroad’s westward expansion.

Actually, the settlement begun by those pioneers was hardly the beginning of civilized life near the confluence of the waterways now known as Firesteel Creek and the James River.

About 1,000 years ago, an American Indian settlement sprang up along the creek and rose into a village of about 70 lodges containing hundreds of people. The site of that ancient village is now partially inundated by manmade Lake Mitchell, but much of it is preserved as the Mitchell Prehistoric Indian Village. The site is a National Historic Landmark and is listed on the National Register of Historic Places, and it’s open to tourists in the summer and fall.

A village rises and vanishes

The Indian village along Firesteel Creek was founded during a period of migration up from Mexico via the river systems. The settlement has been dated to the middle of the 10th century â€“ some 500-plus years before Columbus arrived in the Americas.

The village was located in what today is northern Mitchell. White settlers came just ahead of the railroad in the 1870s, and Mitchell â€“ modern home of The World’s Only Corn Palace â€“ was incorporated in 1881. In 1910, a student from Mitchell’s Dakota Wesleyan University discovered evidence of the former village. City residents decided to impound Firesteel Creek in 1927, and part of the village site was inundated by the reservoir called Lake Mitchell.

A nonprofit organization was founded in the 1970s to preserve the village site, and a place on the National Register followed. Since the early 1980s, much more has been done to protect the site and make it a destination for archaeology and tourism.

The site features a museum highlighted by a reconstructed earthen lodge, similar to what the Indian villagers lived in. Just outside the museum, visitors can test their skill with an “atlatl,” an ancient spear-throwing tool used by Indians.

Out on the grounds, a walking path leads visitors to some of the depressions where the village’s earthen lodges stood and then toward the site’s main attraction â€“ the Thomsen Center Archeodome.

The archeodome is a 10,000 square-foot, earthen-floor building constructed over the top of an active archaeological dig. The building includes a lab and equipment for archeologists and elevated walkways for visitors.

In addition to its historic attractions, the Prehistoric Indian Village also features the work of modern Indian artisans in its gift shop and stages Indian-themed events on its grounds. The American Indian-influenced band BrulÃ©, for example, has played many summer concerts at the site.

There are plans to add more amenities to the site in the future, so that it can fulfill the hopes stated on the Prehistoric Indian Village Web site:

“The Indian Village is developing additional avenues to link the past to the present, creating a destination where visitors can discover and experience past- and present-day Native people. At the same time, the Indian Village advances important archeological, educational and research goals.

Other Areas of Interest

If this interests you check out some of these other nearby attractions: