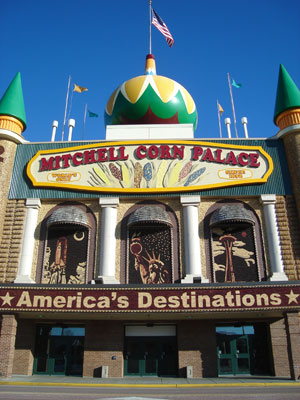 If you were to stop tourists and ask for their impressions as they leave The World’s Only Corn Palace in Mitchell, it would not be uncommon to hear â€œIt’s just a gym with corn on itâ€ from one visitor and â€œIt’s the most incredible thing I’ve ever seenâ€ from the next.

Such is life for the so-called â€œworld’s largest bird feeder.â€ It is derided as â€œcornyâ€ by some, and hailed as â€œa-maize-ingâ€ by others.

Like all historic buildings, this one is more than just bricks and mortar. The Corn Palace is a testament to the pioneering 19th century businessmen who founded it, the legendary entertainers who have thrilled its crowds, and the historic politicians â€“ from William Howard Taft to Jack and Bobby Kennedy to Barack Obama â€“ who have used its All-American image as a backdrop for their presidential ambitions.

It’s not necessary to know everything about the Corn Palace. It is, after all, just a stopover for most people on their way to or from the Black Hills. But knowing a little can alter your perception and upgrade your visit from forgettable to memorable.

Here are the basics: The Corn Palace was dreamt up in 1892 â€“ just three years after South Dakota statehood â€“ by a group of local businessmen.Â They needed to increase the local population in order to secure the success of their ventures, so they decided to build a Corn Palace that might help convince potential residents of the area’s agricultural abundance.

The Corn Palace, its decorations, and its annual fall Corn Belt Exposition grew in popularity. By 1905, the local businessmen who supported the Palace determined that a bigger one was needed. They tore down the first Palace, which was located at the corn of Fourth and Main, and built a new one a block to the north at Fifth and Main. The second Palace also proved too small, so it was torn down and a third Palace was built in 1921 â€“ again a block to the north and this time with public funding â€“ at Sixth and Main.

That third Corn Palace is the one that still stands today. It’s a contributing structure to Mitchell’s Historic Commercial District, which is listed on the National Register of Historic Places. 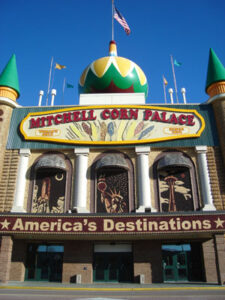 The “Worlds Only Corn Palace” is located in Mitchell, SD.

The Corn Palace is not constructed of corn, as some assume, but is nearly covered in it. Each year, local artist Cherie Ramsdell sketches the murals that will adorn the building’s exterior. Ramsdell is the latest in a proud line of mural artists that includes the late Oscar Howe, an acclaimed American Indian artist. Howe’s work can still be seen several places in Mitchell: inside the Corn Palace, where pictures of past Palaces adorn the hallways; in the Oscar Howe Art Gallery at the Dakota Discovery Museum; and in the dome of the Carnegie Resource Center, where Howe painted a mural for the Depression-era Works Progress Administration.

After the murals are sketched, they are transferred onto giant rolls of tar paper. Every fall, the old corn murals are torn off and the new tar paper is tacked up. Then, the new ears of corn are nailed into place using the transferred designs for guidance â€“ sort of like painting by numbers.

The corn is grown by local farmer Wade Strand, whose fields are located southwest of Mitchell. He plants 40 to 50 acres with various varieties of seed to produce different colors of corn.Â Sour dock and rye is gathered anywhere it can be found and is used as decorative trim.

Ramsdell and Strand are paid for their work, as is the crew of mostly seasonal workers that does the decorating. All told, it costs the city of Mitchell about $130,000 per year to decorate the city-owned structure.

Many visitors, many uses

The public investment pays dividends in the form of the 200,000-plus visitors who come to the Corn Palace every tourist season. During the summer, a gift shop featuring South Dakota-made products is set up on the Corn Palace’s auditorium floor. During the winter, the auditorium serves as the home for numerous community activities, including games featuring the local high school and college basketball teams. Current NBA star Mike Miller, of the Minnesota Timberwolves, played his home games at the Corn Palace for the Mitchell High School Kernels.

Politicians seem to have a special affinity for the Corn Palace. Its auditorium seating, along with its iconic stature, makes it a perfect setting for a political rally. The Corn Palace’s notable political visitors have included Theodore Roosevelt, William Jennings Bryan, William Howard Taft, Franklin Delano Roosevelt, John F. Kennedy, Robert Kennedy and, in the summer of 2008, Barack Obama.

Mitchell native and resident George McGovern, the 1972 Democratic presidential nominee, shared the stage with both Kennedys and Obama when they visited. Lovers of politics and history who visit the Corn Palace might also want to stop at Mitchell’s McGovern Legacy Museum, located in the McGovern Library on the campus of Mitchell’s Dakota Wesleyan University.

To get to the Corn Palace, just follow the many signs from Interstate 90. Once you’re there, the friendly staff members will be more than happy to direct you to the McGovern Legacy Museum and other Mitchell attractions like the Dakota Discovery Museum and the Mitchell Prehistoric Indian Village. If you’re looking for a place to eat, there is a cozy plaza directly across the street from the Corn Palace, where you can literally sit in the building’s shadow as you enjoy a meal or an ice cream treat.

So there you have it: the story of the Corn Palace, a building that’s far more than just a gym with corn on it. As you walk away from your visit, hopefully you’ll be as impressed as then-Mayor A.E. Hitchcock hoped visitors would be when he issued this welcome to Corn Palace visitors in 1908:

â€œEven if you travel hundreds of miles, even if you walk the streets at night, even if you go hungry and thirsty, remember as a compensation that this palace has brought to your eye and ear something of the best the world can bestow.”

Cost of admission is FREE! Hours are subject to change. Please check with the Corn Palace to verify hours before your visit.