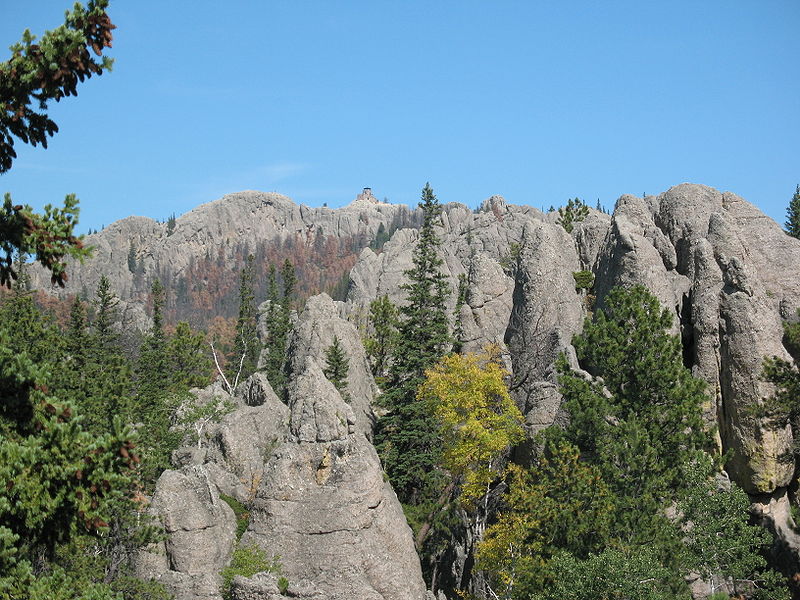 The word â€œHillsâ€ in the phrase â€œBlack Hillsâ€ is a major misnomer. From atop Harney Peak, that point is abundantly clear.

So, yeah, the Black Hills are more than hills. They’re mountains, and Harney Peak is the grandest of them all. The good news for hikers is that, despite its soaring height, a series of trails makes Harney Peak’s summit accessible. Most people reach the peak via a trail that begins in the Sylvan Lake Day Use Area.

Harney Peak is only a moderately difficult hike today, but fewer than 150 years ago the mountain was the mysterious heart of a foreboding and uncharted region frequented only by Native Americans.

Valentine McGillycuddy is said to have made the first recorded visit to the top of Harney Peak in 1875. McGillycuddy was then a surveyor for the Newton-Jenney Party, a scientific expedition that confirmed the presence of gold in the Black Hills.

A military expedition led one year earlier by Gen. George Armstrong Custer had reported finding gold in the Hills, a finding that prompted a gold rush and the U.S. government’s eventual breaking of an 1868 treaty promising the Black Hills to the Lakota Sioux Indians. Custer and some of his men apparently climbed near the summit of Harney Peak but didn’t scramble up the last rise and, therefore, don’t get credit today for being the first white men to reach the absolute top of the mountain.

The Rev. Samuel Hinman, member of a Special Sioux Commission, reported visiting the Harney Peak area in an 1874 letter published as part of a report from the U.S. commissioner of Indian affairs to the secretary of the interior. Hinman touched on the â€œHillsâ€ misnomer and labeled Harney Peak a â€œmountain, for such it really is.â€

â€œWe found everywhere a country mountainous, rough, and ragged, cut up by deep valleys and steep ravines, and thickly covered with pine in various stages of growth,â€ he wrote.

Named for a general

Harney Peak was named by Lt. Gouverneur K. Warren in the 1850s for Gen. William S. Harney. Warren had fought for Harney in the 1855 Battle of Ash Hollow, in which U.S. forces defeated a group of Brule Sioux Indians in present-day western Nebraska, south of the Black Hills.

The Ash Hollow battle was viewed as a victory of major importance by whites, because it avenged the so-called Grattan Massacre of 1854, in which Sioux Indians killed 30 U.S. soldiers. The Ash Hollow victory also brought about a period of relative peace for settlers passing through Sioux Country on the Oregon Trail. Consequently, it’s not surprising that the highest point in the Black Hills and several places in Oregon and other parts of the west were named for Gen. Harney.

Harney Peak today is within the Black Elk Wilderness, named for an Oglala Lakota Sioux Indian said to have survived the Battle of the Little Bighorn and the Wounded Knee Massacre. Black Elk also claimed to have received a â€œgreat visionâ€ while he was atop Harney Peak.

Many modern people seek their own spiritual connection to nature each year on the Harney Range trails — mostly on Trail No. 9, the most popular route to the peak. The trail begins near a swimming beach in the Sylvan Lake Day Use Area in Custer State Park and stretches three miles to top. The six-mile-round-trip hike takes about four to five hours to complete and is rated as moderately difficult. Anyone of good physical condition can reach the summit.

The trail consists of dirt, rocks and tree roots. At many points, the forest of pine, spruce and fir trees gives way to majestic, rocky outcrops and sweeping views. Atop Harney Peak is a structure formerly used as a fire lookout and built by the Civilian Conservation Corps in the 1930s. The startlingly expansive view from the peak allows visitors to gaze over land in four states — South Dakota, Nebraska, Wyoming and Montana.

Thousands of people hike Trail No. 9 each year, making it the least-wild area of the Black Elk Wilderness. Hikers who crave solitude are encouraged to use other trails in the wilderness, which are described well on Web pages maintained by the state Department of Game, Fish and Parks and the U.S. Forest Service.

â€˜The whole hoop of the world’

Once you’re atop Harney Peak, you’ll recognize why so many people make the hike every year. There are few places in South Dakota that inspire the kind of natural awe that the view from Harney Peak does â€“ the kind of awe described eloquently by Black Elk in the book â€œBlack Elk Speaks.â€

â€œI was standing on the highest mountain of them all, and round about beneath me was the whole hoop of the world,â€ he says in the book. â€œAnd while I stood there I saw more than I can tell and I understood more than I saw; for I was seeing in a sacred manner the shapes of all things in the spirit, and the shape of all shapes as they must live together like one being.â€