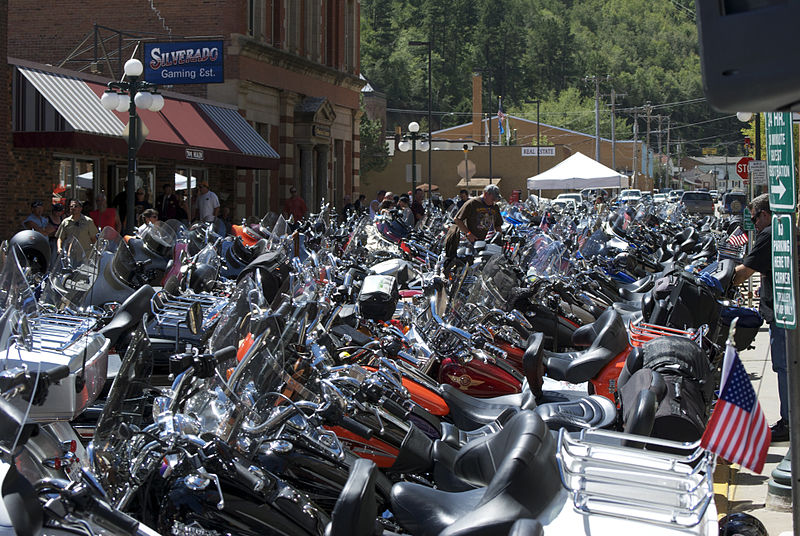 Located in Meade County, South Dakota on the edge of the Black Hills, Sturgis receives a steady overflow of tourist activity. The city is most famous for hosting the biggest annual motorcycle rally in the nation. Each August, the week-long festival attracts nearly 500,000 motorcycle enthusiasts, turning the normally quiet town into a site of bustling activity and revelry. Even when the rally has drawn to a close, the Sturgis Motorcycle Museum & Hall of Fame caters to the appetites of bike aficionados with an elite display of limited-edition and antique motorcycles. On Main Street in the heart of Sturgis, One-Eyed Jack’s Saloon & Steakhouse caters to patrons year-round, boasting six outdoor bars and two indoor bars with an Old West atmosphere. Tom’s T’s and Turkey Graphics provide specialty gift assortments to locals and tourists.

Established in 1876, the city of Sturgis was named for Lt. Jack Sturgis, a military officer who was killed in the line of duty during the Battle of the Little Bighorn. Each year, the Cavalry Days Heritage Festival commemorates the rich military history of the area. At the Fort Meade Museum, visitors enjoy up-close glimpses of vestiges and souvenirs from the soldiers who served at the historic post. The nearby Fort Meade Recreation Area provides nearly 7,000 acres of lush forests and prairie grasslands at the foot of the Black Hills.

For those seeking outdoor recreation, the Bear Butte State Park offers ample hiking with breathtaking views of natural rock formations from prehistoric times. The walking trails range from easy routes around Bear Butte Lake to the challenging 1,000-foot incline of Summit Trail. Fishers, campers, and horseback riders also enjoy the park’s scenic environment. The mountain is also the site of religious ceremonies held by many American Indian tribes. For those seeking more extensive hiking opportunities, the 111-mile Centennial Trail meanders into the Black Hills. Also among Sturgis’ array of natural phenomena is the Wonderland Cave, a marvel of rock and crystal formations. Since its opening in 1929, the cave has been viewed by millions of sightseers.

If you are looking for a place to camp – Sturgis offers some great campgrounds – and some are open all throughout the year.

Scheduled in August of each year, the nationally renowned bike rally has been taking the small city of Sturgis by storm each summer since 1938. Originally organized by the Jackpine Gypsies Motorcycle Club, the Sturgis Rally started as a small weekend affair with just a few races and events. The following year, the American Motorcycle Association (AMA) officially chartered the event. In the nearly seven decades since, it has swelled into one of the nation’s largest motorcycle festivals. Learn more about the Sturgis Rally and Sturgis Camping during your Rally stay!

Image: This file is licensed under the Creative Commons

The Back 40 Taphouse Grill