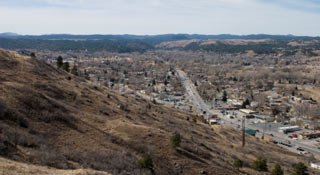 Gateway to the Black Hills 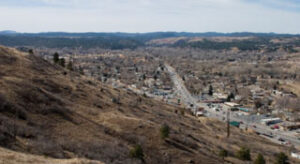 Rapid City is the second-largest city in South Dakota

Known as the gateway to South Dakota’s Black Hills, Rapid City is nestled against the eastern slope of the nationally renowned mountain range. With a population of more than 140,000 (including its metropolitan area), Rapid City is the second-largest city in South Dakota, second only to Sioux Falls. Located in the western portion of the state, it’s distinguished by its own central mountain range that bisects the city into two hemispheres. After visiting its many acclaimed attractions”including Mount Rushmore, acres of national forests, and authentic mining towns”tourists can satisfy their hunger at a wide variety of local dining establishments, from cozy country kitchens to glamorous European restaurants. The Ranch Amusement Park and the unique Dinosaur Park serve as family-friendly recreational attractions.

After the discovery of gold in the Black Hills in 1876, a small group of men led by John Brennan and Samuel Scott forged the original settlement of the area that would eventually become Rapid City. Its name is a nod to the swiftly flowing Rapid Creek that runs through the city. The new city grew quickly, amassing more than 100 residents in just six months’ time. Lumbering, ranching, and farming were some of the earliest industries from which the settlers drew their livelihoods. Today, Rapid City remains the city with the fastest, steadiest growth rate in the state of South Dakota.

Although not an industrial hub, Rapid City is home to several manufacturing companies, including sawmills, ammunition dealers, a cement plant, and some farm equipment suppliers. The city is the site of nearly all manufacturing of Black Hills gold, a highly popular commodity among tourists. Other financially lucrative sectors include medical services, financial consulting companies, and higher education. Rapid City’s biggest source of economy, however, is its abundance of local, state, and federal government agencies, including the National Park Service, Ellsworth Air Force Base, and the Army National Guard, among others.

A highly popular tourist attraction, Rapid City is very close to the national monument Mount Rushmore, which attracts more than two million visitors annually, and the famed Wild West town of Deadwood. The annual Sturgis Motorcycle Rally brings an influx of tourists into Rapid City due to its close proximity. Other recreational and cultural attractions include live theaters, movie cinemas, athletic parks, plentiful fishing, skiing and snowboarding in the Black Hills, and scenic golf courses.

River’s Edge at The Landing