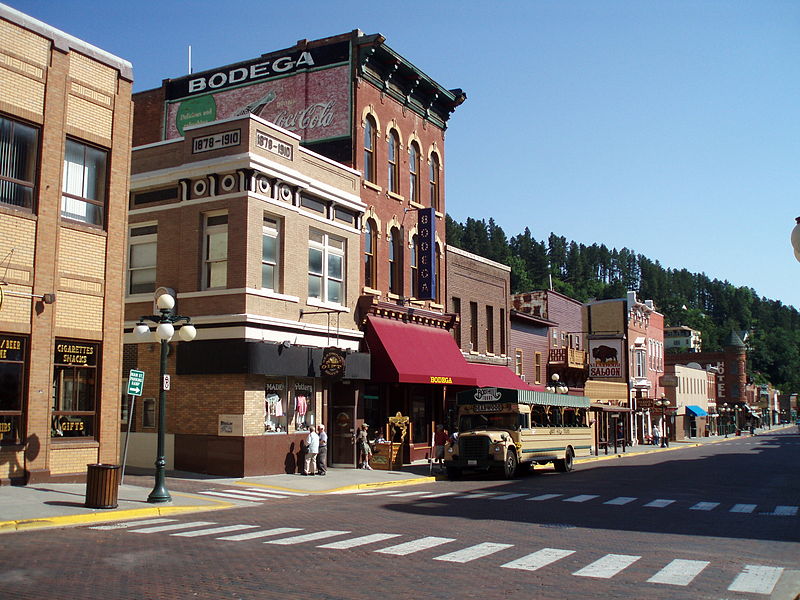 Perhaps one of the most famous cities in South Dakota, Deadwood carries a rich and riotous legacy. The entire city is registered as a National Historic Landmark, with nearly every detail carefully restored to reflect its authentic Old West feel. It’s widely acclaimed as the former stomping grounds of several infamous outlaws and lawmen, including Wild Bill Hickok (who was killed in a tavern brawl in Deadwood), Calamity Jane, and Wyatt Earp.

Incorporated in 1876, Deadwood was one of the many cities to spring into existence in the wake of the Black Hills Gold Rush. In the ensuing decades, its railroad system helped it to become a thriving trading center. Deadwood’s somewhat ominous name didn’t come from a long-ago fatal brawl, but rather from the dead trees originally found in the deep gorge that once occupied where present-day Main Street resides.

While lumbering and continued gold mining fuel the economy of modern-day Deadwood, the community also receives steady sustenance in the form of tourism. Each year, approximately two million visitors delight in the charming wild-West sights and activities, including restored gold mines, historic saloons, and ancient cemeteries. Guided horseback tours give visitors a close-up glimpse into the town’s geology, wildlife, flora and fauna, and mines. Deadwood’s more than 80 historic casinos boast original architecture from 1876. Made legal in 1989 as a means of boosting the local economy, a wide variety of gambling games suit every taste. Additional attractions include the historic Adams House Museum, Mt. Moriah Cemetery (the resting place of Wild Bill Hickok), and the Boondocks Theme Park, among others. A large variety of restaurants, such as Cadillac Ranch, Wild Bill Steakhouse, Gold Dust Restaurant, and Mustang Sally’s, satisfy tourists with local flavor. Diverse shopping opportunities are also available, from the Antique Mall at Deadwood Dick’s to several jewelry shops peddling Black Hills gold.

A range of festive events takes place in or near Deadwood throughout the year. The Wild Bill Days celebration features Wild West reenactments and free concerts, the Deadwood Jam offers two days of eclectic musical performances, and the Days of ’76 event re-create the Old-West rodeo with authentic detail. Celebrations for Mardi Gras, St. Patrick’s Day, and Halloween round out the fun.

Deadwood also provides a highly livable environment for its permanent residents. In a striking contrast to its notoriously brawling history, present-day Deadwood is an extremely safe place to live, with a very low crime rate. A scarcity of corporate taxes makes it easy for new businesses to flourish. The community’s abundance of support industries, from utilities to communications to health care, provides high-quality service to its citizens.

Image: This file is licensed under the Creative Commons

The Hitch Rail Bar and Restaurant

Best Of The West Tours