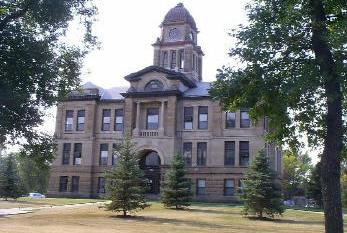 Britton is the County Seat of Marshall County which is located in the Northeast corner of South Dakota. Britton has a population of over 1300, with manufacturing, several retail and service businesses. It has been labeled the Gateway to the Glacial Lakes because of its prime location. Britton is near a number of lakes which provide fishing, boating, camping and swimming. The city built a new swimming pool, library and baseball/softball complex in 2003. 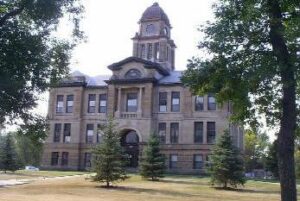 Britton’s history goes back to the 1800’s when many pioneers came to the Dakota Territory to settle. Many were of German and Scandinavian ancestry, but most were native-born Americans from Michigan, Illinois, Iowa Wisconsin, Minnesota and other northern states. The first settlers who arrived here often came in immigrant trains along with their stock and household goods. They went to the nearest railroad station where they intended to locate, and then would travel by horseback, wagon or on foot to the site where they wished to live.

In 1882, the broad expanse of land which is now the town of Britton was just that”many acres of wilderness prairie land, without a home in sight. During the spring of 1883, a few claim shacks were built on the future town site. J. B. Squier and F. B. Squier of Fargo came and squatted claims in 1883, and that summer they were visited by Col. Isaac Britton who thought the area would be splendid location for a town site. The scripting of the town began in 1883, and was completed and filed in 1884. Therefore the town was named after Col. Isaac Britton, born in Concord, Massachusetts in 1826. He worked with the railroad for many years, and while visiting the Squier’s, he charted the Dakota & Great Southern Railroad to extend through this area. After three years living there, Britton sold his property and moved out of the area, with the town of Britton growing quickly. One of the first building projects was a two-story school building and by 1885 Britton had twenty-five businesses. Britton was chosen as a temporary county seat because city promoters agreed to furnish free room for county officials for two years. The first county election was held on July 23, 1885, and after meeting in several different locations; in 1907, the Marshall County courthouse was built in Britton, where it still stands today.

Sponsored and coordinated by the Britton Area Chamber, the Winter Fest brings about 80 vendors together in the auditorium to showcase products, services and other information to shoppers. Winter Fest is usually held in mid March each year, and a Health Fair is also part of the event. Local entertainment is featured throughout this two-day event.

Also held in March, the PTA Carnival has been going on for over 20 years, and is one of the most popular and well attended events throughout the year in the community. The Parent/Teacher Association sponsors a fun filled evening designed for kids–but adults have just as much fun! The auditorium is filled with booths offering games, cake walks, book sales, bingo, face painting, clowns and prizes for everyone. Food is also available through different local organizations.

Each summer around the first weekend in June, thousands of people visit Fort Sisseton, approximately 25 miles east of Britton, to participate in the two-day celebration of Fort Sisseton’s historic past. The Fort Sisseton Festival brings reenactments of frontier living, crafts, melodramas, real teepees, medicine shows, square dancing, military bands and much, much more throughout the weekend.

The Buckhorn Rodeo coordinates an annual western style rodeo just on the outskirts of Britton. Hundreds of people come to watch bull riding, roping, clowns and other rodeo entertainment. This two-day event is held in mid-June.

Locals gather in downtown Britton to eat, with sweet corn as the specialty, for Harvest Days in Britton. The Britton Chamber of Commerce organizes this annual event, usually held the 2nd weekend in August. Shop, socialize, watch emergency demonstrations, or participate in one of the many activities which run throughout the day–such as a bale rolling contest! Then, enjoy the evening with an old fashioned street dance.

Christmas on Parade is sponsored by the Chamber but is assisted by many of the Britton organizations. It’s a day filled with activities in the middle of December including the Tour of Homes (Cancer Society); Cookie Walk (First Lutheran WELCA); Taste of Christmas (Britton Businesses); Buffalo Chili Feed (Masons); Lighted Float Parade (Britton Action Club); pictures with Santa, free kids movie matinae; and the Christmas Story is presented along with cookies and refreshments in the evening.