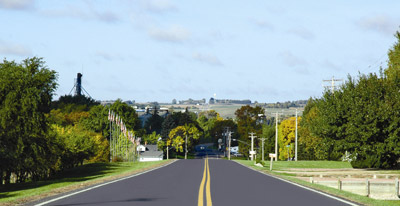 The location of Baltic upon the banks of the Big Sioux River, surrounded by rich farming country, makes it a good business point and has increased its population and commercial importance. These comments summarized from a quote by Dana Baily in 1899 are applicable today. Baltic is a progressive community with approximately 950 friendly citizens and is located about 15 miles north of Sioux Falls, South Dakota.

During the spring and summer of 1880, the road-bed for the railroad between Sioux Falls and what is now Baltic was being constructed. It was slow work to build the grade for a railroad during those early Dakota days. The workers did not have equipment comparable to the present day tractor-powered bulldozers and graders; horses and ox-teams were hitched on- to small scrapers and plows, and these were supplemented by pick and shovel workers. When the warm weather arrived, the heavy snow melted in a short time and changed the Sioux River into a rushing flood that washed out the railroad bed from Baltic to Sioux Falls; the Pembina Railroad tracks in and south of Sioux Falls were also inundated. The Milwaukee track was laid from Dell Rapids to Sioux Falls in 1881. It was during that same year that Frank and Justin Pettigrew began the construction of a power dam and a flour mill which formed the nucleus of what was to be the town of Baltic, then named St. Olaf and later was called Keyes and a post office was established under that name; however it was shortly thereafter re-named Baltic.

The River Park Rendezvous is sponsored by ABATE of Sioux Falls, Inc. annually. The first ‘ride-in’ was held in 1998 and has grown steadily each year. The two-day campout is typically planned the weekend after Labor Day.

River Park is located west of the river and north of the main highway.  It features a baseball diamond, softball diamond, playground, restroom and concession facilities, picnicing, fishing, and camping. Centennial Park on Lovely Avenue features Murphy’s Pond, a gazebo, and picnic areas. Tower Park features a playground and is located at the base of the water tower. Berg Park also has a playground and is located on Elm Avenue in the north part of the city. Baltic Heights Park, the newest park, is located on 15 acres in the northeast side of town and includes six picnic shelters, one agri-lime ball diamond as well as 123 newly planted 8 to 12-foot trees. Picnic tables and playground equipment make it a great park.

Baltic has a summer recreation program available under the direction of the Baltic Athletic Association.  The program features T-ball, girls’ softball, youth baseball, and men’s softball.