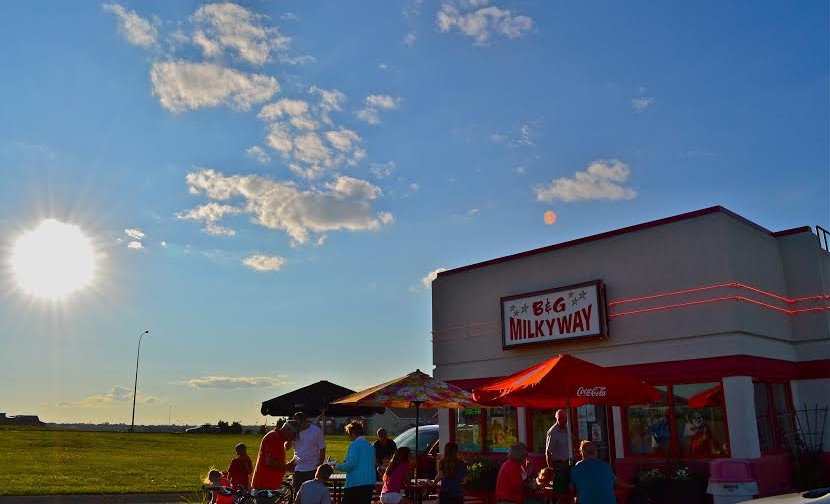 In Eastern South Dakota, residents measure their calendar year by two dates: The day B & G Milky Way opens for business and the day B & G Milky Way closes. The former being the happiest day of the year as it marks the beginning of carefree summer days and ice cream laden sunsets, and the latter date one of the saddest as it marks the end of frozen treat season and the beginning of freezing, blustery temperatures.

A local mainstay with a cult-like following, B & G Milky Way has been serving up a flurry of frozen desserts and other summertime favorite snacks for over 60 sweet years. The first location was opened in 1954 on West 12th Street in Sioux Falls by owners Bertha and Guy Higgens hence the name B & G. Today, the original building still stands largely unchanged as does the incessant line of hungry sweet-toothed patrons.

B & G Milky Way now serves the ever-growing Sioux Falls area with four separate locations as well as one location in neighboring Tea, South Dakota. Each location maintains the local, old fashioned drive-up feel with refreshing friendly service evoking a nostalgic, easy feel of simpler times. Their strawberry ice cream is the most popular item which is made in-house, is trademarked, and has a secret recipe. Other favorites include the sloppy joes, hot dogs, avalanches, slushwhips, and of course the timeless malts and sundaes. And for a true cherry on top, B & G’s ice cream surprisingly packs a lower calorie and fat content than its competitors with a small vanilla cone clocking in at only 70 calories and 2.5 grams of fat!

Since 2000, the restaurant has been available for franchise, so if you are lucky, maybe one will pop up in your city (or better yet, you could open one!). But for now, if you are a resident or a visitor, B & G Milky Way is a must stop when you are in Eastern South Dakota. Whether you are in the mood for a hot dog, a decadent peanut fudge sundae, or just a glance back to the ol’ days, B & G Milky Way is a tried and true South Dakota local favorite.